The election of 1960 was the first watershed election after World War Two and the changes that followed directly and indirectly from that war.  As was mentioned earlier, the aftermath of World War II saw the second major change to the world in the Twentieth Century.  That election was a contest between Richard Nixon, the current Vice President, seemingly representing the old Republican administration and way of seeing versus John F. Kennedy, representing a newer, younger generation, even though Nixon was only four years older than Kennedy.

Knowing about the Jupiter-Saturn cycle detailed previously, one could have predicted that the decade just starting would be much different that the previous decade — the Fifties — without even knowing about the upcoming Uranus-Pluto conjunction.  Since President Kennedy was seen as young and healthy, some astrologers at the time, knowing of Tecumseh’s Curse, thought the President would either be assassinated or die in a nuclear war.  For a time in the Fall of 1962, it seemed possible that the second option would happen.  And then the President was assassinated three years into his first term, the first successful Presidential assassination since McKinley over 60 years earlier, thus fulfilling Tecumseh’s Curse once again.

But while the Kennedy administration represented no real change from the previous administration — in fact Kennedy was more of a Cold Warrior than Eisenhower, though many liberals stuck with the dream of Camelot will argue differently — he represented a much different tone than previous administrations had offered, with a bevy of glamorous people and intellectuals in and around the administration.  It is well know that if you please and control the intellectuals who shape historiography — the writing of history — and the perception of the administration, you can get away with a lot, something our current Democratic President is well aware of and has used to his great advantage.  And in fact back in 2008 many people compared the current President to John Kennedy, a statement that was truer than they realized.

But as is often the case, the changes that were most important were on the street, and there is no end of documentation of that fact, and many are still alive who were old enough at the time that their memories still tell of that different decade.  And because television had just come to the fore in the previous decade with the transit of Pluto opposite the Moon of the United States, this was the most heavily documented decade so far in history.  There is no need to go over the changes that occurred in this decade that made it very different than the decade of the Fifties since there is a wealth of information about a decade that has become almost mythical.  But everyone should understand that this decade behaved truly like a waxing decade.

In this chart for the Jupiter-Saturn conjunction of 1961, we see that the Uranus-Pluto conjunction that defined the Sixties is almost 15 degrees from exact, and Uranus is still in Leo.  Pluto is conjunct the transiting Node, giving an strange appearance to the glyph. Mars has just entered Cancer and is square the MC; it is about to transit over the core planets of the US: Venus, Jupiter and the Sun.  This is suggestive of the Vietnam War which was to inflame the nation for the upcoming decade so much that it helped to define the decade.  And there were many urban rebellions, called riots, that also boiled during the decade, as well as the famous assassinations.  Mars was very well relevant in the Sixties, along with Uranus and Pluto.

But for every revolution there is a counter-revolution, and the decade starting in 1980 was the beginning of that.  While President Ronald Reagan did not start the Neoliberal Revolution that had begun under the previous President Jimmy Carter, Reagan certainly symbolized the growth of Newliberalism (see the November 21, 2014 entry the Neoliberalism and the Cult of the Market for more details).  This period of history in America is justly called the Age of Reagan, since he was one of the few Presidents whose influence and behavior so closely symbolized the changes that were going on in this country.  Not only has the Age of Reagan not ended, but the influence of Neoliberalism has increased down through the years from 1980.  But the 35 years of the Neoliberal experiment has caused so much pain to so many people that it is coming under attack from many quarters, as is seen in the current Presidential campaign.  We shall see if we are witnessing the final decade of Neoliberalism, as I have suggested before.

Though Reagan was shot two months after his first term started, he was not killed, thus not fulfilling the Curse of Tecumseh.  Astrologers make arguments about why the curse was no longer operative, some of which involve the element (Earth) in which the conjunction takes place.  I’ve argued previously that John Lennon took the bullet for Reagan.  Reagan was shot less than four months after Lennon was killed; Reagan survived to lead his revolution, and to become synonymous with modern day conservatism.  The United States has certainly changed since the ascendancy of Ronald Reagan. 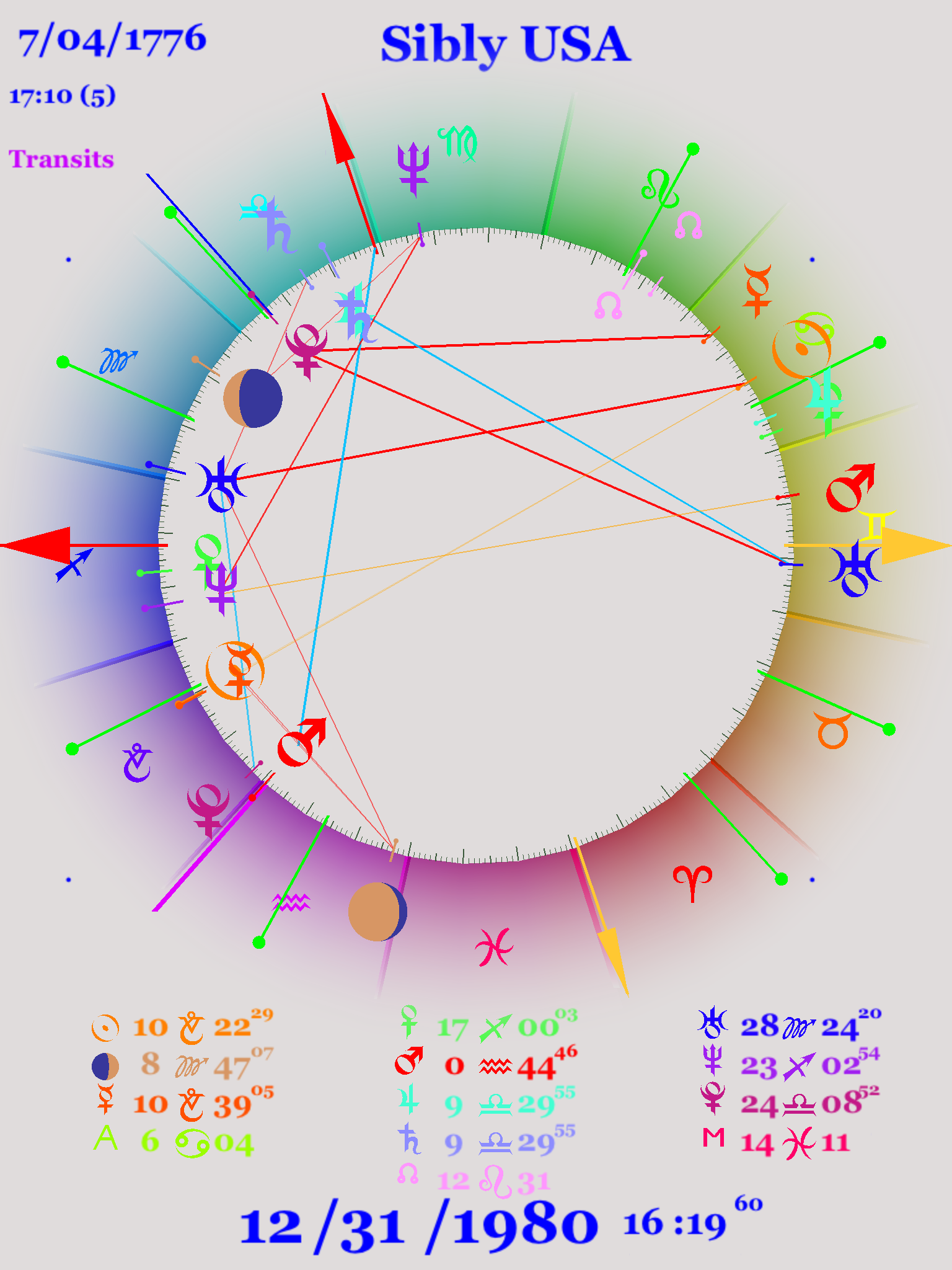 Looking at the chart for the Jupiter-Saturn conjunction for the last day of 1980,  less than two months after the election of Reagan and three weeks after the death of John Lennon, we are struck by all the planets on the East – Ascendant side — of the chart.  A majority of planets on that side indicates an interest in Self, as opposed to Others, and even though the Eighties were not the “Me Decade” (that refers to the previous decade), in the Eighties America “Stood Tall Again” (which refers to a Reagan campaign slogan) and there was increasing emphasis on the “Homeland”, a tendency that has carried on through all of the Age of Reagan.  America has been called the one indispensable nation, as was declared by, among others, a Secretary of State in the next decade, and this is certainly a belief of someone with all the planets in the East.  Oaths to American Exceptionalism have much increased in the Age of Reagan.

The Election of 2000 was a special case, since the President who took office was not the person elected.  The election of 2000 was subject to much dispute, but it was not nearly as contentious as the election of 1876.  However, in that election the defeated party, as in 2000 the Democrats, was able to wrest something desirable from the winning party, in that case the end of Reconstruction, which made a huge difference to the South, the recently freed slaves, and the country as a whole; we are still living with the consequences of that election.  In the election of 2000 the losing Democrats did not appear to get anything but just accepted the loss; the only possible thing that was acquired by the Party was the chance to warn everybody about the danger of not voting for the Democrats, and as a result one of the true liberals in this country, who has done much more to modify the behavior of corporations in a positive direction than all Presidents in the Age of Reagan, has been vilified. That election is held up continually, much in this election season, as a warning to those who would vote for a “spoiler”.

But the tone of the United States changed again after the year 2000.  In fact one can say that the Twenty-First Century is so far shaping up to be different than the Twentieth, which is considered by some historians as the Century of Death.  With the year 2000, and more specifically the date 9/11/2001, American changed into a large booster of the War On Terrorism.  While Ronald Reagan declared terrorism to be an import subject to fight, the Twenty First Century saw terrorism become an every present phenomenon.  And while some may have hoped the election of a Democratic President after two terms of a Republican President would have ended the War of Terrorism, that war has only spread to other venues.  From what we have seen from this century, one could judge this to be the Century of fighting peoples from so-called third world countries, as if that hadn’t been done in previous centuries as well.  I believe when looking back at this century, the first two decades will be seen as an anomaly — there are already many hints already of what is really critical. 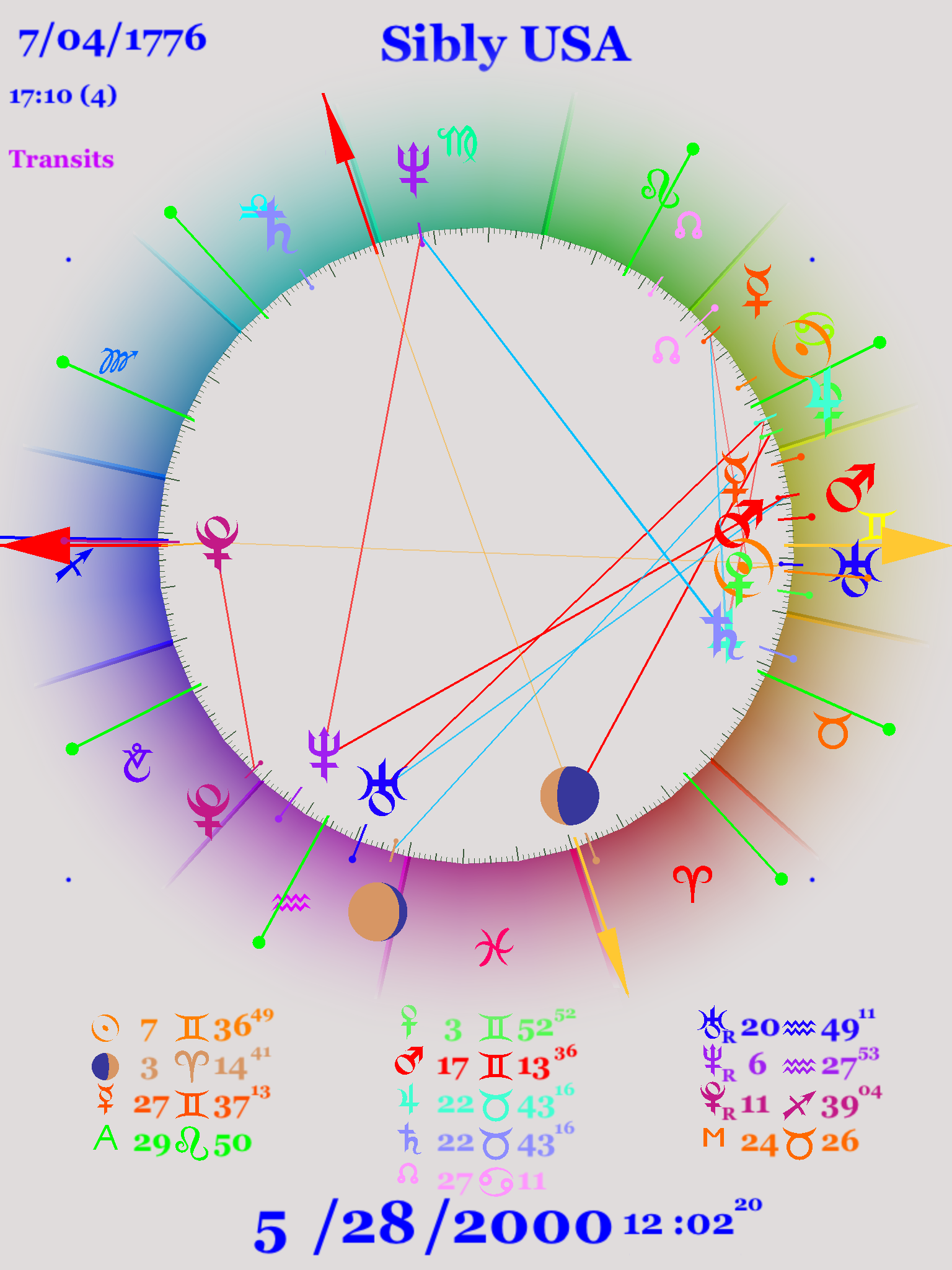 If we look at the chart for the first Jupiter-Saturn conjunction the most notable feature is Pluto conjunct the Ascendant.  Not only was this the case for the 9/11 chart  but it suggests the nature of the next two decades as well.  Note also that Pluto is semisquare the natal Pluto, thus emphasizing the natal Pluto semisquare Ascendant, the tightest aspect in the chart, which can be described briefly as “My Way or the Highway” — America acts like it is (which was true for much of the last century) the most powerful and intimidating country in the world and can get away with literal murder.  The Pluto on the Ascendant foreshadowed the Global War on Terrorism which is such a prominent feature of the first two decades of the new century.

The next watershed election is scheduled for 2020.  Looking at that chart, we see that Pluto has moved on from its position twenty years before, and now is approaching a conjunction with the natal Pluto.  As well, the Jupiter-Saturn conjunction is just beyond the natal Pluto, so that the midpoint between that conjunction and the transiting Pluto is exactly on the natal Pluto.  All of this emphasizes the United States Pluto Return, which will be discussed in detail at a later date.  This will be the prominent aspect of the first part of the third decade of this century.  No nation has lasted long enough to have a Pluto return, which takes about 250 years.  Usually constitutions are rewritten before 250 years have passed; our constitution, which was based on an unwritten constitution of our mother country, was old at the time (see The Frozen Republic by Daniel Lazare for details). What does a Pluto Return mean?  In an individual human being, Saturn returns are important.  We’ve mentioned before Uranus returns in the United States.  This Pluto return will be a make-it-or-break-it time for the country.