The first of these three was actually called Trinity, and since it was the first — people did not know if it were possible before then — it is in some ways the most important, even though it is relatively little known compared to the other two, which followed the month after Trinity. The name Trinity came from a poem (Holy Sonnet 14) by metaphysical English poet John Donne who lived in the Sixteenth and Seventeenth Centuries. The name was chosen by physicist Robert Oppenheimer who had worked on the bomb and was present in New Mexico.

After being developed for years, the first nuclear explosion was achieved in the New Mexico desert fifteen seconds before 5:30 in the morning of July 15, 1945. At the same time the Potsdam meeting between the leaders of the United States, Great Britain, and the Soviet Union was happening to plan out the shape of the world after World War II. Remember that in those days people did not fly to reach overseas conferences, but rather took ships that took longer in transit than airplanes. In this case it took Harry Truman and his assistants eight days to reach the conference in Germany, which had been defeated two months earlier. Truman brought with him many aides who had strong anti-Soviet stands, and they encouraged him in his toughness towards Stalin. The meeting had been postponed by Harry Truman in order for the results of the Trinity to be known. It has been reported that Truman’s demeanor towards Stalin became more assertive after news of the success of Trinity reached him at the conference.

The explosion was successful and surprised many who were there. Oppenheimer later said that a line from the Hindu scripture Bhagavad Gita “I am become Death, the destroyer of worlds” came into his mind after seeing the success. There are actually three films (three different cameras) on YouTube of the Trinity explosion, in black and white.

Looking at the Trinity chart, two things stand out immediately; Saturn at the Ascendant, less than a degree into the first house. And remember that this is an accurately timed chart! The other thing immediately apparent is the opposition from Neptune to the Midheaven.

The tightest aspect is the sextile between Venus and Pluto. Saturn on the Ascendant is the feeling of being frustrated, according to Ebertin. Neptune at the nadir, the point opposite the MC, suggests the sense of confusion and lack of clarity surrounding this event. Many of the scientists involved thought the bomb should be used in a demonstration for the Japanese to witness, where the military men wanted to use the bomb directly. The scientists were frustrated in their desire, even though they made entreaties to government officials.

This tight sextile prompts us to look at the sixth harmonic chart, which proves very interesting. In this chart we see Saturn conjunct the Ascendant opposite the Moon conjunct Uranus at the Descendant. And of course Venus and Pluto are tightly conjunct, something we should except since in the first harmonic chart they are sextile, which is the sixth harmonic aspect. Notice especially the Saturn-Uranus opposition, less than thirteen minutes from exact, which indicates some odd multiple of thirty degrees in the first harmonic. Looking back at the first harmonic chart, we see that Saturn and Uranus are semisextile (angle of thirty degrees) with orb of two minutes. Think of two consecutive signs — the nature of the thirty degree aspect: they generally have little in common. It has been said that each sign rejects the nature of the previous sign. The semisextile, as well as the corresponding aspect of 150 degrees (the inconjunct) has a separative nature. In this case, this aspect merely accentuates the nature of Saturn and Uranus. Or, in plain English, this aspect, and the event it represents, show a large contrast and conflict between the old — Saturn — and the new and/or revolutionary, that is Uranus.

Once the atomic weapon was proven to work by the Trinity explosion — before that moment people were not sure that the atomic weapon would work, and some even thought that the test would ignite the atmosphere or some other horrible thing — there was the expectation among many US officials that the bomb would actually be used. The actual dropping of an atomic bomb on an enemy occurred about three weeks later at the Japanese city of Hiroshima. Hiroshima had been protected from most of the bombing of japan by conventional bombs that had destroyed large parts of cities like Tokyo. The people of Hiroshima wondered why they had been so lucky, but their city was just one of a list of Japanese locations that were “saved” in case the atomic weapon proved to be useful. 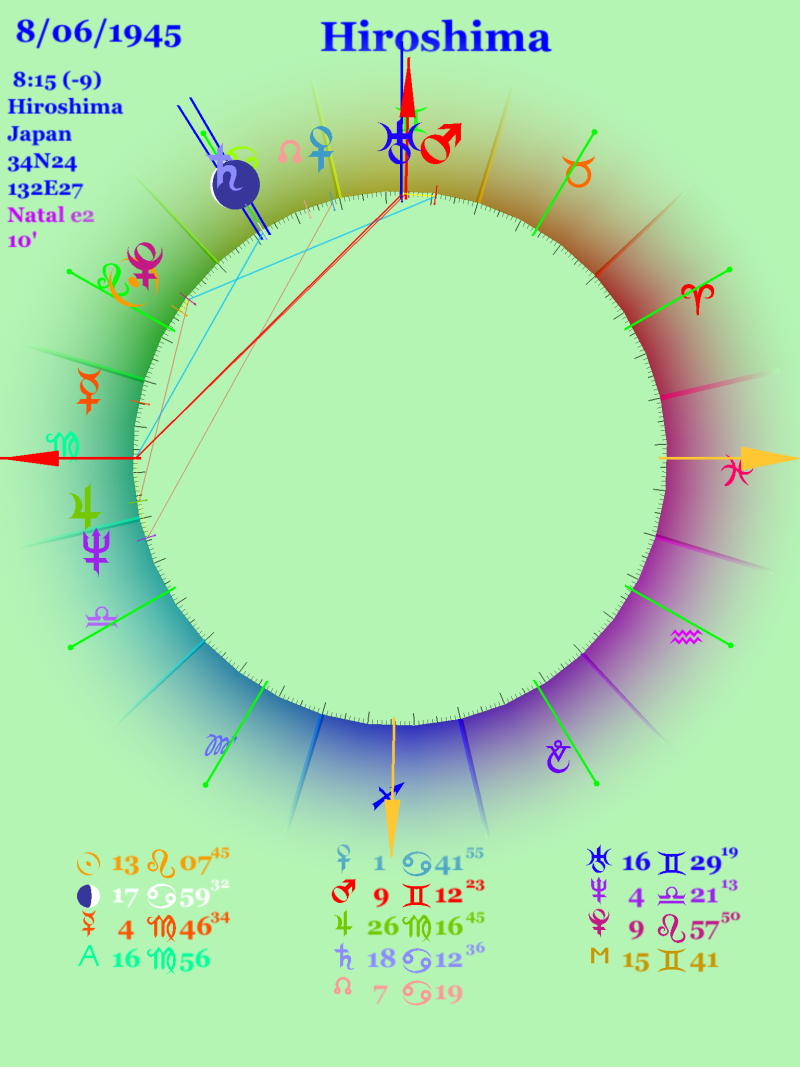 At 8:15 in the morning the B-29 bomber named — for the pilot’s mother — Enola Gay dropped a Uranium bomb called Little Boy on the city of Hiroshima. In an unusual move, there were no dropped leaflets warning the city residents of immediate destruction and the need to evacuate. The bomb exploded over a hospital in the center of the city, immediately killing all patients, doctors, and nurses.

This chart for the first use of an atomic weapon on a target has some fairly obvious indicators. This chart is the most blatant of all the three charts. Note Uranus at the Midheaven loosely conjunct Mars, Saturn conjunct the Moon, and Pluto conjunct the Sun. Pluto conjunct the Sun says a Plutonian event occurred on this day, or in other words an atomic explosion. Saturn conjunct the Moon refers to suffering (Saturn) of the people (Moon) which one can assumed happened that day at Hiroshima. And Uranus is conjunct the Midheaven at less than a minute of arc and Uranus was exactly on the MC three minutes later. This aspect says that there will be a Uranian event at this location and minute. Note that the Hiroshima bomb, unlike the Trinity and Nagasaki ones, was a Uranium bomb rather than a Plutonium bomb.

Uranium is the last (number 92) known element for most of history, just like Saturn was the last known planet for most of history. Plutonium (number 94) was artificially created. Just for interest, the element between — Number 93 — is called Neptunian. These elements are created by a nuclear reaction, and as of writing the last element is 118 which as yet does not have a name. A couple of these artificial elements have been discovered in nature, created by natural nuclear reactions. 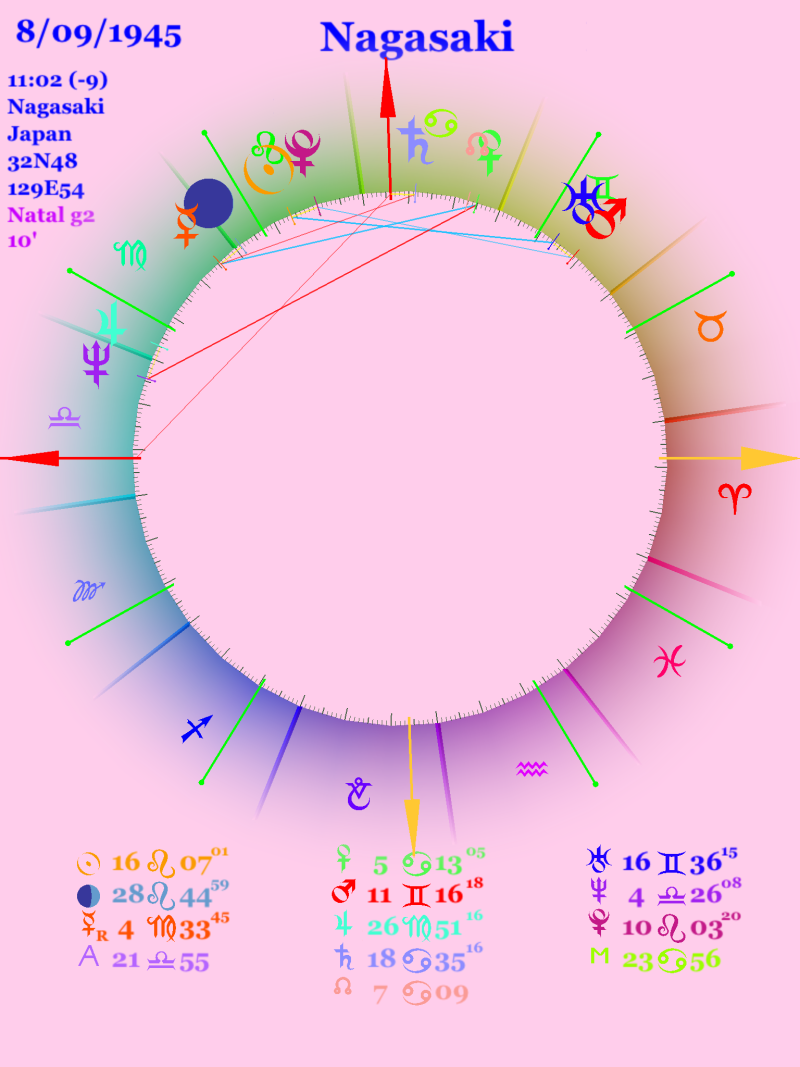 On August 9 another B-29 called Boxscar (Bock’s Car) carrying a heavier bomb called Fat Man flew over another city in Japan — Kokura — and attempted drop that bomb, but the city was obscured by clouds and by the smoke from a nearby city which had been bombed by the Americans the night before. After three tries and running low of fuel, Boxscar flew on to the second possible target — Nagasaki — only to find it also obscured by clouds. Just in time a hole in the clouds opened that allowed the bomb to be dropped but not over city center. The bomb was dropped over Japan’s largest Christian community which was north of the city center. The bomb was almost twice as powerful as the one dropped over Hiroshima.

In the Nagasaki chart, Sun is still conjunct Pluto, not surprising since this event was only three days after Hiroshima, so the Sun had move about three degrees. The Mars conjunct Uranus is a little tighter. 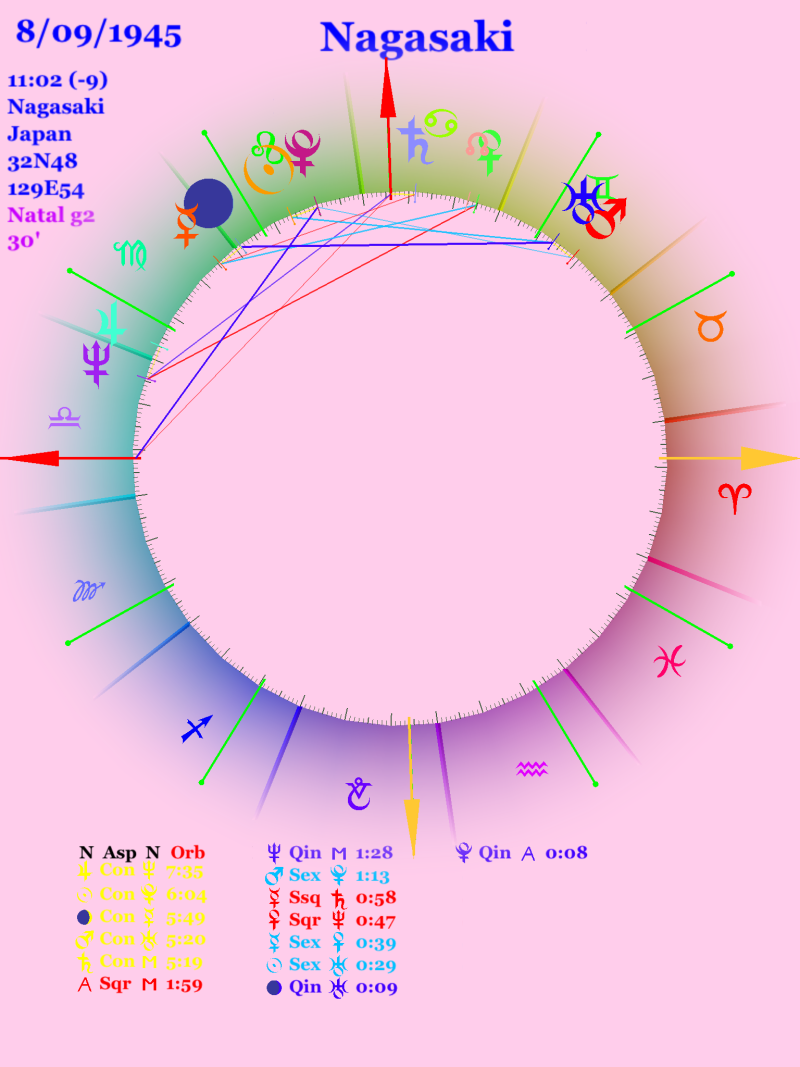 By Doug Kellogg, reprinted with permission