These two concepts — political parties and American exceptionalism — came into popular consciousness at about the same time, shortly after the birth of the United States and the beginning of the French Revolution. These important changes to the newly born United States are signified by a powerful transit of an outer planet over the Moon that has not been repeated. The Moon represents the people of a country, but it also signifies something more intangible — the basic concepts/consciousness of the people.

It is well known that political parties were not allowed for in the Constitution. When that was being written in the latter part of the Eighteenth Century it was not thought that factions were needed, and in fact George Washington was assigned as the leader of the new country. But that changed, and now we have basically two political parties: the Republican party, established in 1854 out of several minor and dying parties that existed at the time, was considered the “anti-slavery” party at the time of its creation. The other big party now is the Democratic Party, considered the world’s longest lasting political party, and thought to be the “pro-slavery” party before the Civil War. Democrats like to say they were founded by both Thomas Jefferson and Andrew Jackson, but that myth is only half true. When Andrew Jackson first ran for President — in the 1824 election — he said he was dedicated to the Democratic party of Thomas Jefferson, but the party formed around him was certainly different than the party of Jefferson. And in fact this Democratic Party, the one we now know, was essentially created by the Little Magician Martin Van Buren, who was Jackson’s Vice President in his second term and then President in his own right for four years after that. Van Buren never got a second term, partially because of a financial crisis called the Panic of 1837, which was caused by, inter alia, Jackson’s war with the second Bank of the United States, a concept dreamed up by George Washington’s surrogate son Alexander Hamilton. Martin Van Buren, as his name suggests, was of Dutch heritage, and was the first President not to have an English background. He was also the first president born in the United States and not a colony of Britain.

But during the last decade of the Eighteenth Century, and especially during the second term of George Washington, several “political clubs” were formed, often under the instigation of Washington’s Secretary of State, Thomas Jefferson. These organizations were called by such names as the Republican Society, the Democratic Society, etc. The Federalists, which was the name given to the political faction which had George Washington as its representative, did not like these clubs. Jefferson had seen political clubs in Revolutionary France when he was an ambassador there, and thought they would be a good idea in his native country. He saw that the elite ignored the wishes of the common folk and so they needed something to represent them. Jefferson was aware of the elitist tendencies of the people in power — too early to call them a party — and, along with James Madison, urged the non-elite to take powers into their hands. The best known of the political clubs in France was called the Jacobins. These political clubs caused newspapers to form supporting those clubs. Republican newspapers grew in this period and those newspapers served a a push back to the Federalists.

This ferment and dissatisfaction with the way things were, the control of the government by only one faction of the populace, led to the rise of political parties, and the first such party was the Democratic-Republican Party of Thomas Jefferson and James Madison. This party was to win its first election in the hotly contested election of 1800. 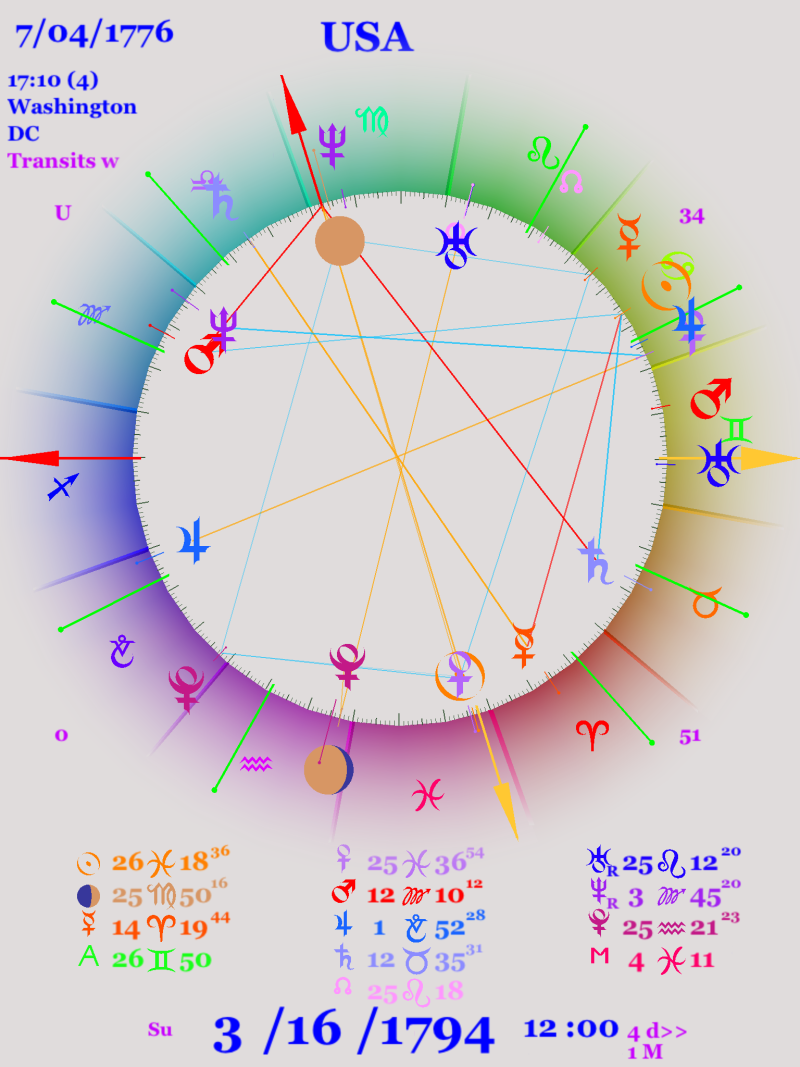 This upheaval among the population of the United States, which led to such a fundamental change, is shown astrologically by the very slow transit of Pluto across the Moon of the United States. Here is a chart for the beginning of those political clubs in 1794. Note that for this chart Pluto is conjunct the natal Moon with an orb of only two degrees, while at the same time Uranus is opposite the Moon with about the same orb and thus we also have Uranus opposite Pluto. This Uranus Pluto opposition was also prevalent in the French Revolution which was taking place at the same time across the Atlantic. In fact, the day Louis XVI was executed (January 21, 1793) the opposition was exact within one minute. As was seen during the decade of the Sixties, Uranus-Pluto aspects can be powerful. This opposition was one cycle before the opposition in the first decade of the Twentieth Century and a cycle and a half before the conjunction of those two planets in Virgo in the Sixties. 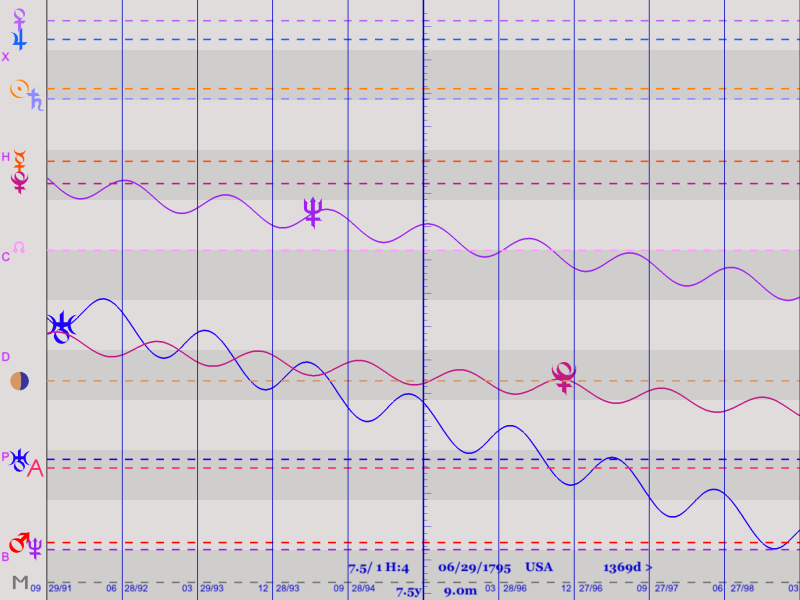 By looking at the graphical ephemeris for a several year period we can see that the Uranus Pluto opposition lasted for about six years — 1789-1795 — and the Pluto conjunct the US Moon from about 1793 to 1799, that is to say most of last decade of the Eighteenth Century.

When American was a new country, it really did not have an unifying philosophy, something that could bring the wealthy who essentially wrote the Constitution, and the common folk who populated the country, together. Thus the concept of American Exceptionalism, the belief that America was a unique country designed to lead the world in a burst of democracy, arose. It was thought by French revolutionaries, English dissents, and many Americans that the American Revolution was followed by the French and then certainly other nations would follow those two. Thus there sprang the belief that America was the forerunner and the French were next, and soon the revolution would sweep the world. America was exceptional, and a model for the entire world, it was thought at the time.

One can say that American Exceptionalism began in Europe. The revolutionaries of France admired the youth and vigor of the American experience. One writer, Elisabeth d’Houdetot, wrote to Jefferson in 1790 admiring the Americans for not having an old regime to destroy, as was the case in France. Granted, the French were unaware of the daily savagery of the use of slaves, and the ill-treatment (that is genocide) of the native population. This certainly aided the French (and also British dissenters) in picturing America as grand and successful experiment.

American Exceptionalism served as “national religion” that bound together the citizens of this new land when nothing else would. The citizen were proud that America was a shining light in the world and that it would lead other nations to a revolution. Thus the populace of the Eighteenth Century America were unified – they had a common purpose. All the countries of Europe had a common heritage, and while the Federalists were taken by the British, from whom they rebelled, this was not good enough for the deplorables. So because of the French Revolution, Americans were united in believing that they lived in an exceptional country.

By Doug Kellogg, reprinted with permission