The dominant story of 2020 involves the three planets Jupiter, Saturn, and Pluto. Each pair of these planets has a conjunction during the year, and there is much expectation of what those conjunctions will bring. The first is the Saturn-Pluto conjunction on January 12. Then the first of three Jupiter-Pluto conjunctions takes place on April 4. Finally the Jupiter Saturn conjunction occurs on the solstice of December 21, 2020.

But I want to point out a combination of the three planets with Mars added in just to give the whole thing some spice. That is, as illustrated in the chart below, on or about October 16, 2010, less that three weeks before the Presidential election in the United States.

Does this chart portend anything interesting? It’s hard to pick the best date here, but I chose this one because there is also a new moon, which indicates new beginnings. In this chart we have Jupiter conjunct Pluto conjunct Saturn within a total spread of about six degrees. Pluto is at the midpoint of Jupiter and Saturn. Mars is square Pluto and most especially Jupiter. The New Moon is opposite Mars and square Saturn and closely square Pluto and thus there is a T-Square with that triple conjunction of those three planets that are the stars of 2020 at the apex. Completing the picture we have Venus opposite Neptune (romantic love/deceptions in justice) and Uranus opposite Mercury (changes in the way of thinking). So the two other outer planets, Uranus and Neptune, are aspecting two personal planets, Mercury and Venus. On that day every planet is making an aspect. 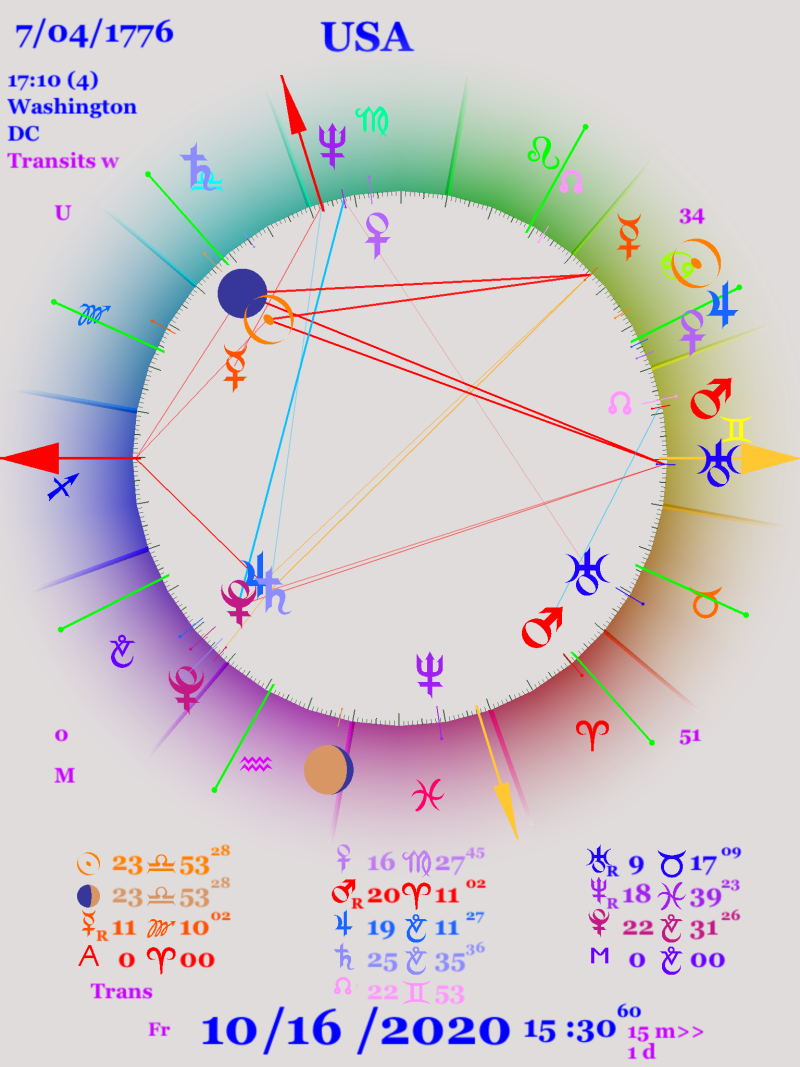 Furthermore, looking at the US chart, the triple conjunction is opposite the US Mercury, representing the press of the nation, and the New Moon is squaring Mercury and sesquiquadrate Uranus, completing the natal Mercury semisquare Uranus, which represents a basic theme of the United States, freedom. I am sure that basic issues about the nature of America will come up at this time. And this year will bring up many issues regarding the press, which will be discussed in another blog post soon.

Another interesting chart is for the last quarter moon just before this new moon. In this one retrograde Mars is exactly square Pluto, the Moon is opposite Jupiter and thus completing a T-square with the Sun at the apex, Neptune is sextile Jupiter and trine the Moon thus forming half a kite formation that shares a base opposition with the T-square.

If we compare this with the earlier chart Mars is even tighter in a square to Pluto and the Moon is opposite Jupiter and thus the Sun is square Jupiter, forming a T square. Pluto is closely at the midpoint of Jupiter and Saturn chart on October 9, the last quarter moon before the New Moon on October 16. In this chart the square of Mars and Pluto is almost exact. 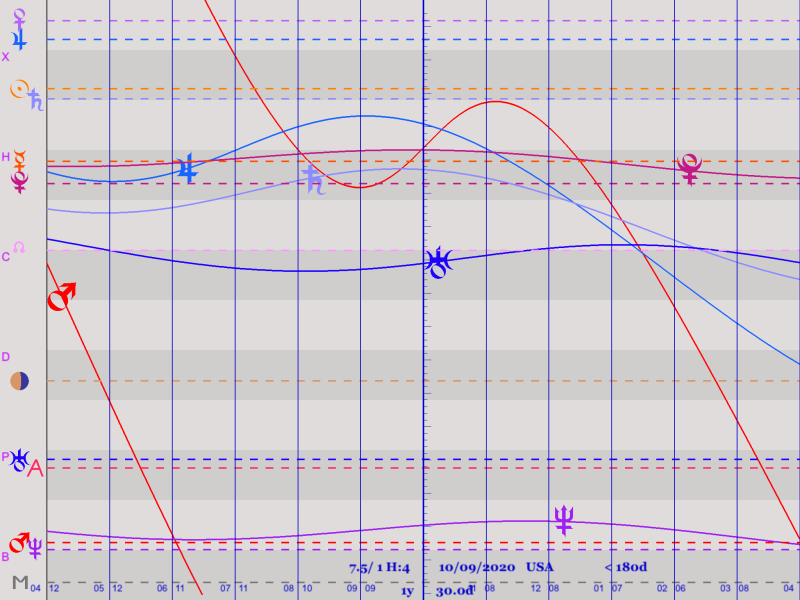 These various permutations of Mars, Jupiter, Saturn, and Pluto are obvious in the graphical ephemeris for the period in question. Starting in August Mars (red line) crosses in order Jupiter (blue line), Pluto (dark red line), and then Saturn (light blue line), turns retrograde and then again crosses Saturn, Pluto and Jupiter before turning direct and crossing those three planets — Pluto, Saturn, Jupiter — again at the beginning of 2021; Mars squares Jupiter for the last time when Jupiter is square Uranus in January. At the date in question — center line of the graphical ephemeris — you can see Mars is exactly square Pluto.

So I see October as the month when Jupiter, Saturn, and Pluto are set up for action by Mars crisscrossing those planets in late summer and early fall of 2020, just in time for the US election that many people are looking forward to with hope or trepidation or both.

And for future reference, here is the chart for election day. There is still the conjunction of Jupiter, Saturn, and Pluto opposite the US Mercury. There are four retrograde planets: Neptune, Uranus, Mars, and Mercury. Having a national election when Mercury is retrograde (stationary turning direct) suggests that the early election reports shouldn’t be trusted. Mars — the least often retrograde planet — retrograde as well as opposite the natal Saturn suggests that the outcome will be delayed or that questions will arise (quelle surprise!!). And of course that triple conjunction that has been featured above suggests problems in communication. An election to remember!