Molasses is a product derived from sugar cane and few are familiar with it anymore, though it is often used to make brown sugar and rum. It can be a sweetening agent and it is more nutritious than for example honey. But an interesting historical event happened one January in Boston where molasses took center stage.

I’ve previously written about all the things that happened in 1919 but here is one that I did not mention, and it is not signified by what I said was the major astrological configuration of that year: Saturn opposite Uranus, the staid versus the new. But perhaps if you squint your eyes and try real hard you can see this case as the structure of the vat against the changeable molasses.

On the afternoon of January 15, 1919, at 12:40, a huge vat — 50 feet tall and 250 feet around — of molasses gave way, flooding the city of Boston, or at least the surrounding blocks on Commercial Street, with molasses. The tank was owned by Purity Distilling Company, a subsidiary of U. S. Industrial Alcohol which used the molasses stored in the vat for war purposes. That day was relatively warm for January in Boston: the temperature got to 45. The vat was on Boston’s North Beach between what is now a skating rink and a park. The location of the vat is now a baseball diamond. The 2,300,000 gallons of molasses, weighing 13,000 tons, spread in all directions in a 30 foot wave. Tenements in the region had their basements filled with molasses, and it was difficult to clean. Molasses was tracked around Boston over the next few weeks as cleanup proceeded. Fresh water from fire hydrants proved unable to dilute the sticky substance, so finally salt water from the bay was used, resulting in much molasses being dumped into Boston’s harbor. The situation would have been less serious if it had happened in July. But in the colder temperatures of January, the molasses was slow and hard enough that some people and animals were trapped in it, and it was difficult to rescue some since the molasses, which had previously been warmed, was initially as fast moving as it would have been in summer months. An estimated 21 people died as a result of the molasses flood; there were 150 injuries and 14 buildings were destroyed, including a two story brick firehouse that was almost dumped into the Boston Harbor.

Later scientists built scale models of the vat to determine what actually happened. Using these measurements, they were able to estimate the speed of the molasses at 35 mph. So now we know the speed of molasses in January! 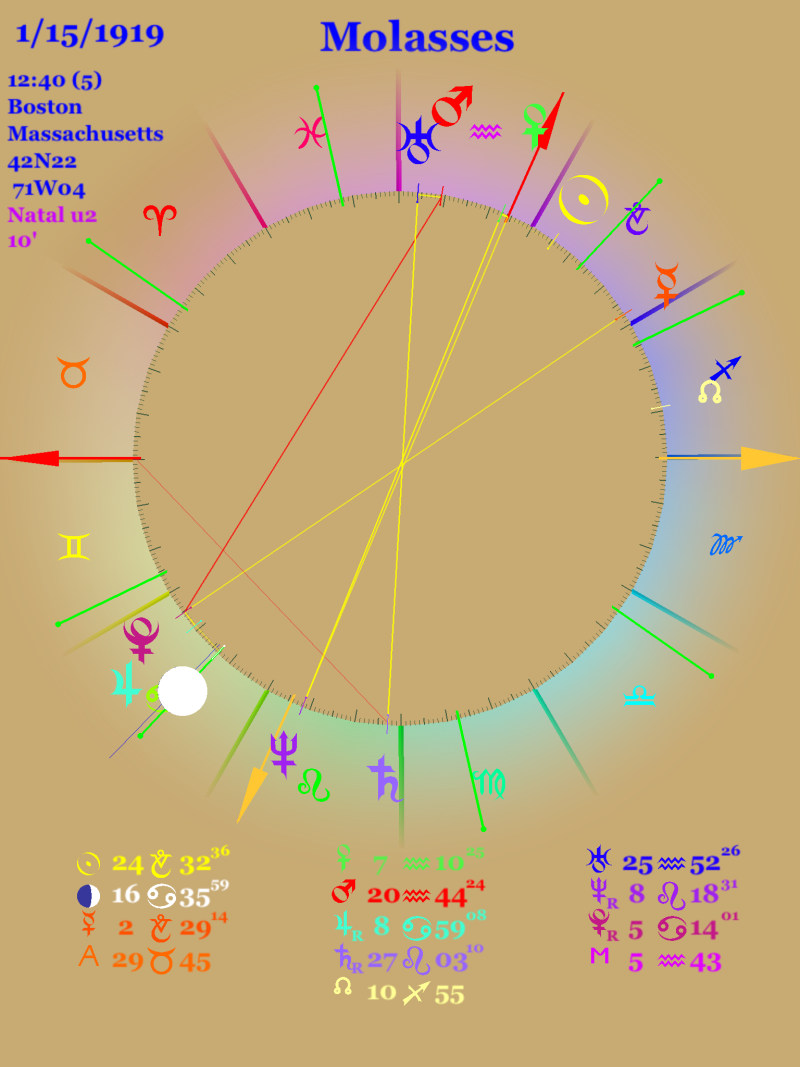 It is fortunate that we have a time for this incident, so that the angles — the MC and the Ascendant — are somewhat accurate. And the MC-IC axis definitely tells a story. As we can see from the chart for this incident, not an especially big one like the start of a major war, but something definite, that Venus, the planets of sweet substances, was at the Midheaven, and opposite Neptune at the IC, a planet suggesting a liquid or lack of clarity or uncertainty at the foundation of the subject. And if you are familiar with the planetary patterns of famous astrologer Marc Edmund Jones (who also gave us Sabian Symbols) this chart is an obvious see-saw, suggesting the theme of opposition and conflict. There is also the Saturn opposite Uranus that was talked about previously and also Mars sesquiquadrate Pluto, suggesting transformation through motion (even if only at 35 mph), and the North Beach was certainly transformed, and an opposition of Mercury and Pluto suggesting the spectators that for several weeks gathered on the North Beach to marvel at the changes in that part of the city. There is even a loose conjunction of Mars and Uranus in the tenth house, that almost stereotypal astrological signature of an accident.

And yes, it was later decided that the foundation of the vat holding the molasses was not especially sturdy. Proper trace minerals that would have hardened the steel used for the vat were not added, the sturdiness of the vat was never tested with (for example) water before it was filled, and this time the vat held more molasses than was usually the case. Some warm molasses was added shortly before the accident.

The molasses, imported from the Caribbean, was used to make alcohol for the First World War, and it had been a profitable business for U. S Industrial Alcohol (USIA). But then this accident happened two months after the war ended. This incident was a major source of litigation over the next years – one of the biggest set of legal cases in the history of Massachusetts, as families of people who were trapped or of animals that were lost sued USIA. There were 119 claimants involved and 25,000 pages of testimony were produced from all the trials over a three year period. U. S. Industrial Alcohol was the company that had owned the vat of molasses so important to the war that had just finished. Since there was a Red Scare happening at the time with much accusations of anarchism and communists under the bed (the crime that Sacco and Vanzetti were accused of happened 15 months later in Braintree, Massachusetts, a dozen miles south), USIA initially accused saboteurs of destroying the vat. But in the end USIA had to pay out $600,000 for the lack of technical supervision in construction of the vat.