We have had a whole lot of Neptune over the last few years, and it is not going to end any time soon. I’ve previously written about the Neptune transits to the Ascendant and the Sun of the United States. The last of those transits has just about finished. But coming up is the Neptune demi-return, the return of Neptune to be opposite its natal position. This occurs at almost the same time as the Pluto return. This is not too surprising, since the period of Neptune — 168 years — is almost two-thirds the period of Pluto — 248 years — so there is a certain resonance to their periods. This Neptune demi-return will be followed soon after by Neptune hitting 0 Aries and Neptune crossing the IC — opposite the Midheaven — of the US, so soon the whole world, and especially the United States, will have more than a touch of Neptune.

Neptune the planet — who was in Roman mythology (Poseidon in Greek) the god of the Seas (and also earthquakes) — covers many ideas. In the best sense it can relate to spiritual matters, but also deception and illusion in a mundane situation or for those who are not spiritual adepts. Neptune should be strong in actors (witness Elizabeth Taylor’s birth in Neptune-ruled Pisces) who need to behave like someone they are not. But it is difficult to manifest the spiritual side of Neptune when we are talking about countries (e.g. US) or many people in their mundane existence. In such cases Neptune can represent lies, deception, dissembling, but also vapors, poison gas, and illness, especially when the causes are not well known. In particular, with the current COVID-19 pandemic that is engulfing the world, Neptune is a fitting symbol. But remember Neptune symbolizes many things, so don’t get caught up in assigning it just one meaning, as Neptune is more difficult to tack down than other planets. Though it seems a little too obvious, Neptune can easily be associated with plagues or pandemics. More fundamentally Neptune can represent invisible or at least unclear things, as in the term “Neptunian” fog. So things now are very Neptunian — the situation is unclear, and it is almost as if everyone has an opinion of what is happening, and some quote “experts” but in a more general sense, no one really knows what the future will be, but it wouldn’t be “more of the same”.

Let us briefly look at previous times Neptune made hard aspects — conjunction, square, opposition — with its natal position. There are relatively few of these, since Neptune moves slowly around the Sun. In a human being with a limited lifespan, the stages of a life can be measured with the aspects of Saturn to its natal position, most commonly labeled with the term “Saturn Return” though other aspects are important also. But with a country, and especially the United States, the progress of the country can best be measured with the aspects of Neptune, as I indicate in the following paragraphs.

The first opening square of transiting Neptune to its natal position was in 1817. This was an interesting time even if there were no stand-out events. The last of the “Virginia Dynasty” Presidents, all of whom came from the state of Virginia, James Monroe, had just been elected. It is known as “The Era of Good Feelings” when past animosities were ended. The War of 1812, which had seen the burning of the nation’s capital city, had ended two years earlier. The Federalist Party, those who had essentially started the country before there were actually political parties, and had been represented by the first two Presidents, was for all intents and purposes dead. This time represents the end of the “childhood” of the country and a time when it moved into adolescence. Not only were Presidents elected that were different than the first few, for example Andrew Jackson in another ten years, but the contentious issue of slavery was about to become very obvious and could no longer be ignored with the Missouri problem that was solved by the eponymously named Compromise.

The first time it was opposite its natal position was in 1858 and 1859. We all know what was happening then: This was the final run-up to the American Civil War, which had been developing for at least forty years since the opening square, but by the time of that demi-return the war was almost here. This Civil War marked America’s entrance into young adulthood after it “solved” a problem that had been with the country since its founding.

The closing square of Neptune was in 1898. It is noteworthy how often several important transits happen at the same time — the current decade is a hallmark example of such a phenomenon. But this Neptune aspect was also an example; this period saw the Spanish American War and the beginning of the Philippines War while there was a Saturn Pluto opposition. America was now passing out of earlier adulthood which was marked by the Civil War and was becoming a full adult and, wanting to be considered a “successful” country, became an empire. This can be seen as the beginning of the “American Century”.

The first complete Neptune cycle, which involved Neptune returning to its natal position, was 1938 and 1939; in the same way that that first demi-return was a run-up to the American Civil War, this return was the run up to the Second World War, though most Americans at the time were just happy that the worst of the Great Depression was over. Those who paid attention to what was happening in Europe or the Far East knew something was coming down. By the end of the War, America had achieved the promise that had been set in motion at the closing square: it was truly a world-spanning empire.

The second opening square, which also corresponds to a Saturn-Pluto conjunction and much else was happening in 1980 and 1981. As has been mentioned before, this is the beginning of Neoliberalism, that branch of extreme capitalism that has dominated the world for the last forty years, and, I believe, is coming to an end with the Neptune demi-return. This closing square represented elderhood for the country, but not in a good way — the country has become older without becoming wiser, like an elderly teenager. This upcoming decade represents hopefully a maturing out of that difficult stage. Unlike a physical human being, countries can have more than one “lifespan”. In this sense the upcoming Pluto return (symbolically, since Pluto can represent death) is the end of that stage most represented by the promise of the first Neptune return.

Since in the US chart, Neptune is close to the Midheaven, it is not surprising that the Neptune returns and demi-returns correspond closely to Neptune at the MC or opposite the MC, which has been shown before to correspond to a crisis in America. The first such crisis was the Revolutionary War, then the Civil War, then World War II. This next crisis is coming up, and one indicator is the Neptune demi-return that also corresponds to the Pluto return, so one might guess that this return/demi-return of two outer planets will be more impressive/significant than either by themselves. But these returns also correspond to Neptune on the Cardinal axis, either at 0 Aries or 0 Libra so they also represent major changes in the World.

US history in textbooks is often divided into four periods — before the Revolutionary War, between Revolutionary and Civil Wars, after the Civil War but before World War Two, and after World War Two, that is today. So American history is conveniently demarcated by those the events, though all signify ongoing events to which those turning points — Revolutionary, Civil, World War — are significant. And it should be obvious that life before the Revolutionary War, when people were British citizens, was different than life after when they were citizens of a new country. After the Civil War, those who were slaves were now free and could, theoretically at least, vote and travel about. And after World War Two so many things changed that it is often called the Great Acceleration or the start of the Anthropocene — literally a new era in world history. We are soon to reach another one of those turning points. The time after this Neptune demi-return (and many other events which I have talked about before) will be unlike the time before (i.e, now). The history of the world, when looked back at from the future, will show that there was a major change that happened in the third decade of the Twenty First century. Neptune is a big, but not the only, part of this, symbolized by the only outer-planet midpoint configuration with Neptune at the apex in 500 years and Neptune crossing the Cardinal axis at Zero Aries, the start of things.

This future could be determined by the same forces that made the last 70 (or 500) years what they have become, or it could be determined in a more democratic way. I believe it was the Scottish Enlightenment philosopher David Hume who said that in all societies the people are the ones that truly have the power, but they have been convinced that they don’t, so it does not matter. In authoritarian societies like the former Soviet Union, it was obvious that the media and the government were lying to citizens and so they paid attention to the samizdat (unauthorized newspapers), but in more “democratic” societies people don’t know they are being lied to, so it is almost a harder problem to convince them that they have the power. What we need to see now is that the individuals come to believe that they are the powerful ones and not allow themselves to be controlled by the government and that handmaiden of government, the mass media, all of whom are owned by large corporations that do not have the interests of individual citizens as their prime concern.

In the chart of the US, Neptune is square Mars. This is an extremely problematic aspect for a nation. The country in question is deluded about its use of power, which in the case of a nation is military power. It — the country — tends to believe that all uses of force are only for the benefit of others and military operations are done with the best of intentions: Deception is paramount. When transiting Neptune is conjunct/opposed the natal Neptune it is also squaring the natal Mars, further emphasizing the ingrained Mars Neptune square. This demi-return could be the time of another crusade to save the world. In the current US this crusade comes in two flavors: straight neoconservative, often the favorite of Republicans, and the responsibility to protect (R2P) which is favored by Democrats (also called “the cruise missile left”). In practical application, there is not much difference in outcome, but the R2P crowd (Samantha Powers is a good example) are often cheered in elite publications. That is the “respectable” type of intervention. 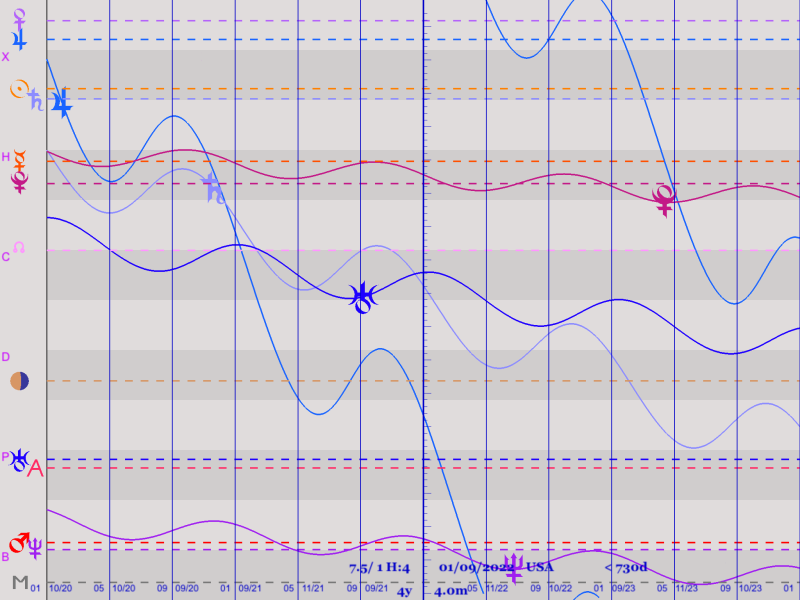 In the fourth harmonic graphical ephemeris we can see how close the lines for Mars and Neptune are, near the bottom of the image. Neptune first comes close to Neptune-Mars in the summer of 2020 and first exactly contacts both planets in Spring of 2021. Both planets are contacted throughout the remainder of 2021 and 2022 and the last exact opposition to natal Neptune is at the end of 2022. Also visible in the upper half of the graphical ephemeris is the progress of the Pluto Return which starts and ends a little later than the demi-return.

Neptune indicates the very fluidity of the situation. It is at such a time that the maximum amount of change can be made, or else we can fight among ourselves and let our “Masters” control the situation and its outcome. But one thing is certain: with Neptune so involved, don’t accept anything at first impression, always look beneath the Neptunian surface.