You are here: Home / Archives for microprocessor

You are probably reading this on a device that has a microprocessor, which is the main processing unit of most computers used these days, including the one on your desk, in your lap, or in your hand.  Many of these use a CPU (Central Processing Unit) that is based on Intel architecture, whether or not it is actually “Intel Inside” as that company likes to say.  But in any case, there is a microprocessor in whatever computer you are using right now.  And in today’s world, computers are omnipresent, from the obvious ones in a laptop computer, to the not quite so obvious one in a smartphone, to the various “smart” devices that surround us from smart TVs to smart baby monitors.  But the point is that each of these devices has a microprocessor to give it its smarts.

Many people think that microprocessors have always been with us, or at least all of their lives, but they did come into existence at some point, and that is an important birth point to look at, since so much of the modern world has derived from that.

Electronic computers, when they were first born, operated with vacuum tubes.  Later on, in what is called the Second Generation of electronic computers, transistors were introduced to replace vacuum tubes, and the computers got smaller.  At one point minicomputers were introduced, such has the famous VAX of mid 1970s.  This was a fabulous 32 bit computer very popular in universities and industries at the time.

Most people consider the Eniac as the first electronic computer.  It was manufactured in Pennsylvania and dedicated on February 15, 1946.  Here is a chart for the dedication (of course the birth was earlier) drawn for noon which seems reasonable, and also a chart for that time as transits to the US chart.  While Eniac was advertised as a “giant brain” at the time, it would have far reaching consequences on the USA and the world.  For the birth chart of the first electronic computer, we see a conjunction of Sun, Mercury and Venus, with the conjunction of Mercury and Venus very tight, within a quarter degree.  As we shall see later, this Mercury Venus conjunction is important, and indicates love (Venus) of computers (Mercury) to put it in simple terms.  Jupiter trines the Sun, suggesting that many benefits will accrue from this new machine.  A Full Moon is approaching, and was exact at about 11:30 that evening, indication of a culmination of some cycle.   Not a very impressive chart. 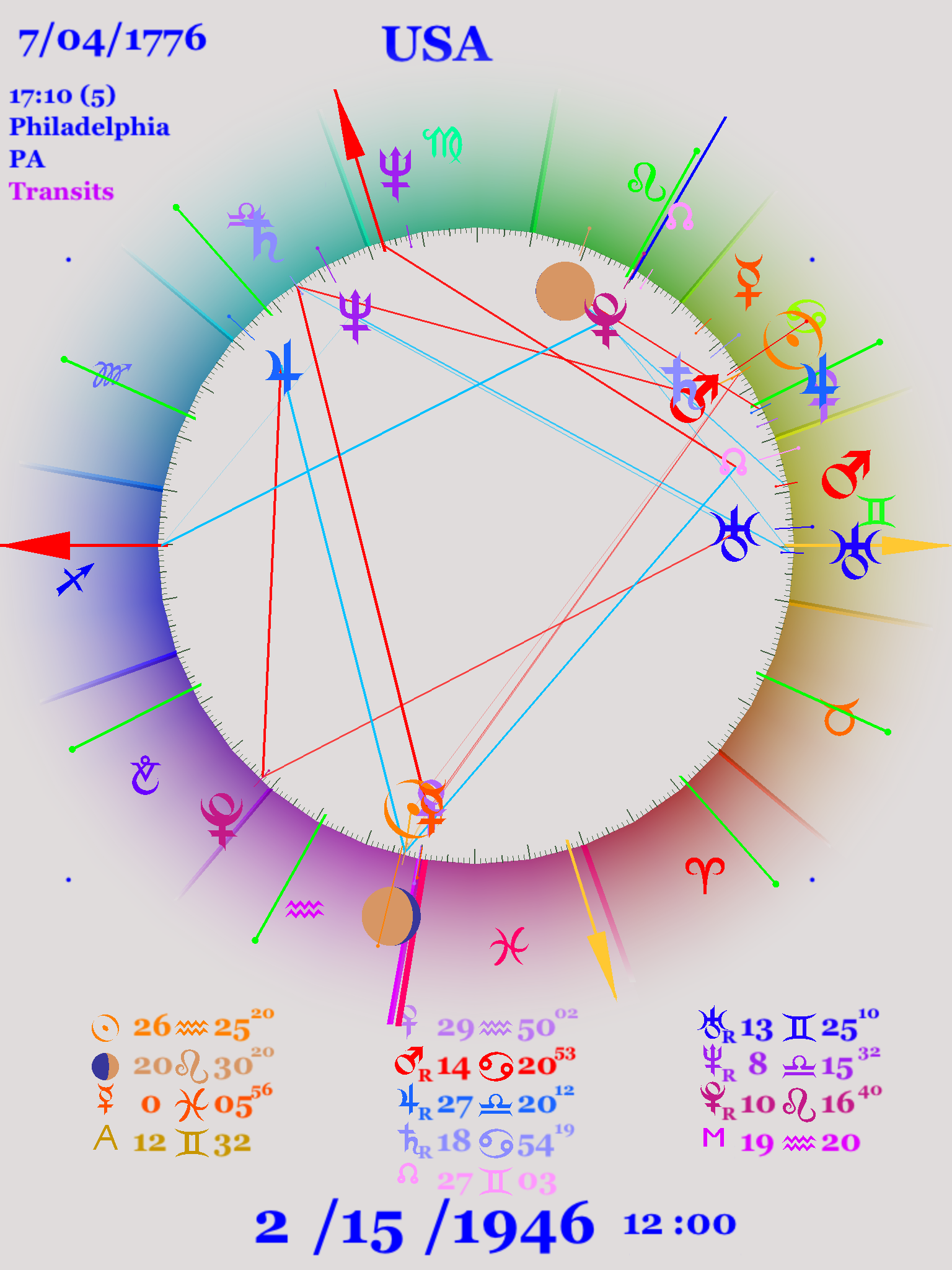 But there is one thing to note when we compare this chart to that of the US.  From the US transit chart, we see that the Sun — that day – is conjunct the Moon of the United States, representing the people.  This event would have great significance for the people of the country, though at the time few realized it.  But looking backwards, we see that this is indeed a seminal event.  One other aspect to notice is that the retrograde Mars is on the US sun.  Perhaps this means that the outcome of this event — introduction of electronic computers — would be long in manifesting.

But still no personal computer.  Minicomputers were smaller than the large mainframes that had dominated the industry before, but you would need a very large desk to hold one.  The birth of the desktop computer was  started with the introduction of the Intel 4004 microprocessor, and the story of its introduction shows how hard it is to get a birth date, let alone a birth time for this seminal occasion.

At the end of the Sixties a Japanese company asked the American Intel Corporation to develop a chip to run its new line of electronic calculators.  The result was a integrated circuit called the 4004, since it was a 4 bit processor.  Today most computers run with 64 bit processors.  The difference is that a four orders of magnitude bigger data size can address more memory and run faster.

Four bits is not really much to do any kind of real world processing, so the first microcomputers that are known used an eight bit processor.  The first was the 8008 (introduced April 1982 from Intel), followed by the 8080 (April 1974) which was better and more widely used.  Also popular was the Z80 (1976) developed by Zilog, a company started by the initial developer of the 4004.  Another chip popular at the time was the 8 bit 6502, developed by someone other that Intel.  The Z80 was used by the Radio Shack TRS-80 (hence the ’80’ moniker) and the 6502 was used by the Apple II.

The data I can find for when the 4004 was completed by Intel is sometime in late January 1971.  The head designer of this chip for Intel Federico Faggin (who later went on to found Zilog which made the Z80) found that he got the wafer of the chip at 6pm, as reported from an official Intel website.  Obviously they though it important if they gave the time, but unfortunately for us they did not give a date, other than January 1971.  So we have no date.  The Japanese company, called Busicom, got the intel 4004 in late March 1971.  I couldn’t find an exact date either.   But what turns out to be most important, and what we have at least a date for, is the time that Intel realize that this device — the 4004 — was a real life “computer on a chip” and could be used for many other things than running a calculator.  This event was an ad in the magazine Electronic News announcing that this chip was available.  That date was November 15, 1971, and the chart for that event (set at 12 noon, which seems fairly reasonable) actually has a lot to say. as opposed to the other possible charts. 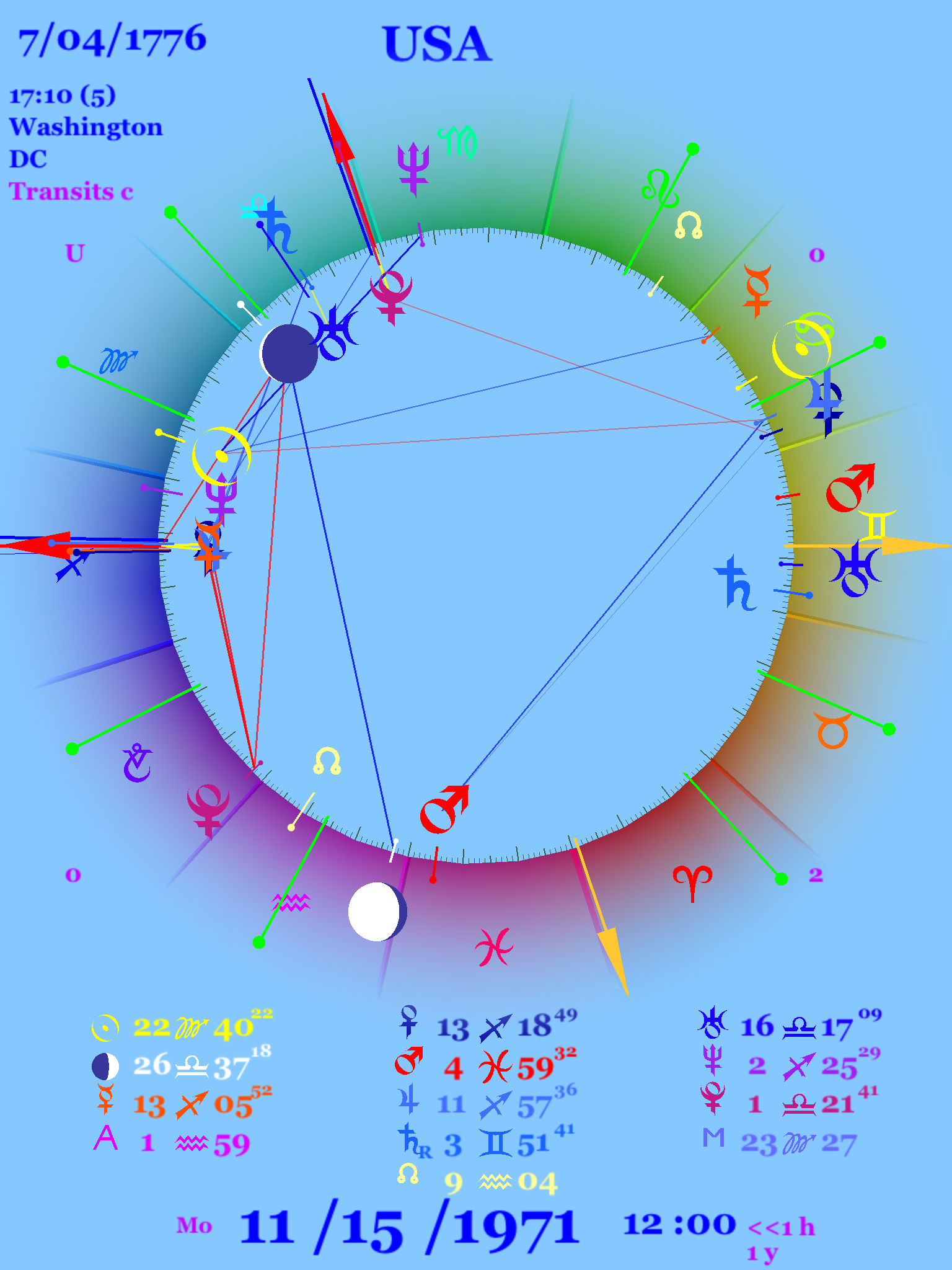 Here is a chart for the transits for that date on the US chart.  The first thing I notice is Pluto at the Midheavern — transformation of the social and public setting of society.  I would say that is a pretty accurate description of the effects the “microcomputer revolution” has had on United States society . But notice also that Pluto is on the Cardinal axis at 1 Libra.  These effects would be on the world at large also.  Again, there should be no argument.  Jupiter is on the Ascendant of the United States on this day.  And it should be obvious that the developments of the microprocessor has led to the expansion of the (economic) power of the United States.  Of course, all other countries now have access to the microprocessor also.  But it is not just Jupiter: a triple conjunction of Mercury, Venus and Jupiter is at the Ascendant.  Mercury is communication and among other things computers; Venus shows the love (even obsession) we have with them; and Jupiter indicate that his love affair with computers (which wouldn’t be possible without microprocessors) is huge and possibly overpowering.  Also note that the Mercury-Venus conjunction in this chart is a bit tighter even that that conjunction in the Eniac chart.   Another aspect, not so obvious, is transiting Uranus conjunct the United States Saturn.  This shows how the forces of change (Uranus) are challenging the forces of the status quo — Saturn.  That was the start of the microprocessor revolution, at the tail end of the Sixties, more than 45 years ago.  It took a while for this revolution to fully manifest itself, but by the time that the Twenty-first Century came along, the revolution was clear.