You are here: Home / Archives for Slavery

Currently we have Neptune in an opening square to the Ascendant of the United States and a trine between Neptune and the US Sun.  Because of the slow passage of Neptune, this pattern was repeated last before Neptune was discovered, in 1853 and 1854.  Thus I thought it would be interesting to look at that period in American history.

In the period 2016 through 2018 we have transiting Neptune making an opening square the the US Ascendant, as has been discussed before, and also a trine to the US Sun.  These two important Neptune transits go on for several years.  The first chart shows a position within this period in which you can see both the square to the Ascendant — red line — and the trine to the Sun — blue line.  Since the square is a fourth harmonic aspect and the trine is a third harmonic aspect, the harmonic which shows both aspects as a conjunction is the twelfth harmonic: 12 = 3X4.  So here is a twelfth harmonic graphical ephemeris allowing one to see when both aspects are coming into orb, exact, and leaving orb.  Neptune first approaches square to the Ascendant in late spring of 2016 — black arrow — and then the trine with the Sun finally ceases in early 2019 — red arrow.  So for about three and a half years the United States is strongly Neptunian.

But this combination of aspects has happened once before in the history of the United States, that is, after its birth, and that was in the period 1853 and 1854.  The third chart is a wheel showing when both aspects were within orb, and the fourth chart is a graphical ephemeris, like the previous one, showing when Neptune approaches the opening square with the Ascendant — black arrow — until when the final trine with the Sun took place at the end of 1854 — red arrow.  This period was shorter than the current one, but many important things did happen 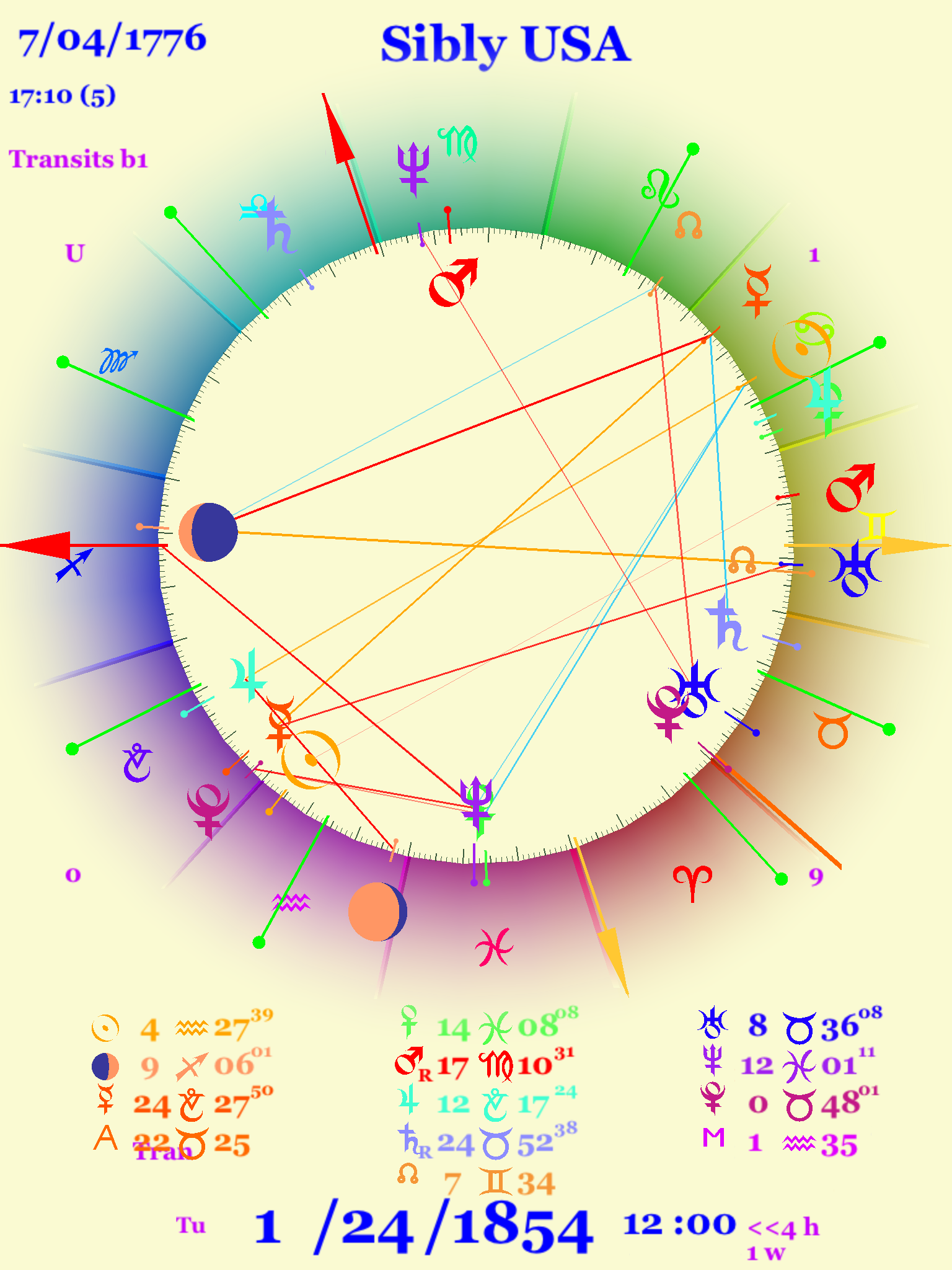 In 1850, under a Uranus-Pluto conjunction, the South thought about leaving the Union, but in a vote of Southern states, only one state, South Carolina, voted for succession, so the matter was dropped for the time being.  But 1850 did see the Fugitive Slave Act (part of the Compromise of 1850) passed, which required northerners to return slaves that had escaped to their rightful “owners”.  This act was not very popular in many Northern cities, and there was widespread refusal to obey its demands.

Then in 1854 the Kansas-Nebraska Act was passed, shepherded by Stephen Douglas who would become famous for his debates with Whig politician Abraham Lincoln, whom he ran against in the election of 1860.  To understand the full import of this act, we will have to explore the history of Congress’s dealings with slavery, which was always a controversial subject in America,

In 1820 Congress passed the Missouri Compromise,  which was suppose to settle the issue of slavery in the country.  Missouri was going to enter the nation as a slave state, thus upsetting the balance of slave and free states in the country.  To avoid this, Maine was broken off from Massachusetts and thus became a free state at the same time that Missouri became a slave state, maintaining the balance.  Furthermore, when other states were made from the vast territory that was the Louisiana Purchase, all states north of the southern border of Missouri (expect obviously Missouri) were to be free states and those south of that border would be slave states.

The chart, above,  for the day the Missouri Compromise was passed, is very interesting. There is a conjunction between Uranus and Neptune, the last one before 1990, opposite the US Venus and square Pluto, which sits on the IC of the United States.  That Pluto position — the conjunction with the IC was yet to happen — indicates  that deep changes to the society of the US were coming in the near future.  This period saw a Venus return for the United States (transiting Venus returns to its natal position), and with that strong opposition, Justice seemed to be in the ascendancy.  This was an illusion but it would takes several decades for this to become clear.

This compromise had lasted for a third of a century, but now that Kansas and Nebraska were about to enter the country, and both of the states were clearly north of the southern border of Missouri and so they should be free states, Douglas, among others, wanted popular sovereignty to be in effect.  This allowed each state to determine its own policies of slavery.  This popular sovereignty passed in the Kansas-Nebraska Act, thus killing the Missouri Compromise and, though it was not initially clear, setting the final stage for the Civil War, which was to come in another seven years.

There were many unintended consequences of this Act.  Because of the repeal of the Missouri Compromise, more and more people became disgusted and disillusioned with slavery and expressed their increasing unhappiness.  Many slave owners from Missouri rushed into Kansas hoping to swell the vote in favor of slavery in that state.  These people were called border ruffians or pukes, and were seen as interlopers by the people who already lived in the Kansas territory.  There were many skirmishes been the pro and anti slavery citizens of Kansas, leading to what has been called “Bleeding Kansas”.  An important preacher from Brooklyn, Henry Ward Beecher (brother of Harriet Beecher Stowe, whose novel Uncle Tom’s Cabin had been published in 1852) sent boxes of what were called Beecher’s Bibles and were actually rifles to Kansas that helped with the bleeding.  A man by the name of John Brown killed five pro-slavery people in Kansas in 1856, before his more famous attack on Harper’s Ferry.  The Whig Party, that had formed as a response to Andrew Jackson, essentially disappeared with the passage of the Kansas Nebraska Act, and anti-slavery Whigs joined with members of the Free Soil Party to form the Republican Party in 1954, thus ending what is called the Second Party System and replacing it with the Third Party System — Republicans and Democrats — which the country still has.  So we can see that the passage of this piece of legislation, considered so fine at the time, on hindsight can be seen as one of the final acts that lead directly to the Civil War.  The Missouri Compromise had settled the waters of the slavery antislavery controversy for awhile, but as an elderly Thomas Jefferson said at the time, this was as a fire bell in the night.  It just took forty years for the fire to be acknowledged.

In summary, this period with the multiple Neptune transits for the United States saw the final disillusionment with the status quo opinion that it was possible to compromise with the slave-owning republic that was south of the Mason-Dixon line, but expanding.  This compromise had been in effect for a third of a century, but it was finally rapidly collapsing.  The end, as Neptune transited opposite the MC of the US and Uranus transited opposite the Ascendant of the US, would not be long in coming.